Yes, we lost 15 chickens all in one night. I was working in the office on Saturday morning. Dave walks in and asked me when the last time I counted the chickens, because it looks like we were missing quite a few.

I ran up to the Hen House and let them out of their run. Grabbed a handful of Black Oil Sunflower seeds and sure enough we were missing 15 chickens! I was in such a shock. I do not count fully daily, I usually just do a visual when I put them away for the night. Anyone with chickens, knows how hard it is to count them, they move quickly. I usually do a hard count about once a week.

I sat and counted and recounted at least 5 times. Dave came up and I told him we were definitely missing 15. At first, I came to the conclusion that they had to have been stolen by a human predator. I made a Facebook post in our local chicken group asking what they all thought could have happened. I got a mixed amount of responses, both for human predator and animal. One response that I got a lot, was in regards for it being a Coyote.

We went to Lowes and purchased locks that are bolt cutter resistant an I ordered an automatic chicken coop door off of Amazon. I figured with either type of predator, human or animal, neither were going to get anymore of my chickens!

After stressing over it a few more days and talking with Dave, I realized that I didn’t lock up the chicken run until after 9pm the night it happened. It gets dark close to 5pm. I let the ladies out everyday when I get home from work. When it gets darker in the evening, they put themselves to bed. From the time they went to bed, to the time I went out to lock up the coop, 3.5 to 4 hours had passed. Plenty of time for a pack of coyotes to make their way into the Hen House and pick them off, one by one.

Dave set up the game cam the day we realized what had happened. The first day nothing. The second day nothing. The third day, he saw a coyote right by the Hen House run. The camera showed a coyote exploring the outside run. We had went out and checked the birds before bed. It disappeared when we got close. When we left, it came back right away with in one minute.

It was 100% a coyote. It has tasted chicken now and it will be back. We will have to deal with it, but it will not get another bird of mine!

We have not installed it yet as the weather turned bitter cold and snowing. Our high for one day was 14 degrees with a wind chill in the negative, as the Nor’Easter was blowing hard.

The weekend after, we had the ladies free ranging since we were in and out of our shop all day. I was able to keep an okay eye on them throughout the day. The day went okay until around 4pm. I walked up to give them treats and get them put away before the sun started to go down. As I was walking up to the Hen House, I saw a hawk fly away from in front of the Hen House. The hawk was able to get ahold of one of our Silver Laced Wyandotte chickens. So now we are having to deal with hawks and coyotes.

So glad you are here! 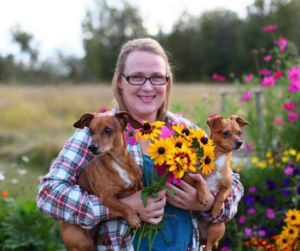 Hi!  I’m Tiffany.  A crazy chicken lady who loves working in her gardens, creating beautiful DIY projects and taking care of her animals and home.  Read more about me here.